We are now looking for adventurers to hop into some great RPG games that will be running online from December - February 2020.

Many of our GMs run their games through our Discord scroll down to view the link as well as our policy on game passes.

Enter a land of insanity and even weirder circumstances. You awake in a strange place with no memory of how you came to be there. Go on adventures attempting to piece together how you arrived in this colorful land, and maybe get a little treasure along the way.
"When I used to read fairy tales, I fancied that kind of thing never happened, and now here I am in the middle of one!”  -Alice's Adventures in Wonderland
Day:  Every Sunday  ( From December - February)
Time: 10 am - 2 pm
DM:  Tessa Schwartz
Slots:  6
Rating: T
https://forms.gle/kNKgxBNqufo6DTh18

I want to run fun, friendly, and open games that are welcoming to new or veteran players.  My games will use published adventures of varying themes and scaling level difficulty.  The adventures have a conclusion at the end of every session, allowing players to join when they want without the worry of "catching up".  All material contains well-written stories, unique monsters, and hand made items!  Come play if you are willing and able to try something different!
Day:  Every Sunday ( From December - February)
Time: 1pm - 5 pm
DM:  John de Witt
Slots: Open: 5
Rating: T
https://forms.gle/RAoHtcEwdL6H8gbS6

Find high adventure in and around the city of Homeport. Navigate political intrigue and invading evil while making a name for the young adventurers.

Day:  Every Sunday  ( From December - February)

Our intrepid band of wandering heroes continues their quest for treasure and adventure in the Darkenfold a dark and primeval forest in the Land of Aihrde.

Day:  Every Monday ( From December - February)

Beneath the unyielding night sky, you stand before a towering glacier and recite an ancient rhyme, causing a crack to form in the great wall of ice. Beyond this yawning fissure, the Caves of Hunger await. And past this icy dungeon is a secret so old and terrifying that few dare speak of it. The mad wizards of the Arcane Brotherhood long to possess that which the god of winter’s wrath has so coldly preserved—as do you! What fantastic secrets and treasures are entombed in the sunless heart of the glacier, and what will their discovery mean for the denizens of Icewind Dale? Can you save Ten-Towns from the Frostmaiden’s everlasting night?

Day:  Every Tuesday  ( From December - February)

Against The Aeon Throne

"An ancient crashed starship on a new Pact Worlds colony in the Vast draws the attention of the sinister Azlanti Star Empire, who invade and annex the colony, remove an experimental starship drive from the crash site, and kidnap one of the colonists. The heroes must liberate the colony from Azlanti occupation before venturing inside the mysterious Star Empire, in search of both the experimental drive and the kidnapped colonist, who is an old friend of the heroes. Will the heroes rescue their friend and keep the drive out of Azlanti hands, or will the might of the Azlanti Star Empire crush them as it has so many others who have stood against the Aeon Throne?" -Paizo Description
Day:  Every Wednesday  ( From December - February)
Time: 6 pm - 9 pm
DM:  Jay Hoover
Slots: Open: 1-6
Rating: T
https://forms.gle/Rt6ybXg2uPyZC8XV8

An isle once ruled by the dragons of the north, east, south, and west but no turned against one another, players must spring into action and find the leader of the rebellion to stop the madness and bring peace back to the isle.
Day:  Every Thursday  ( From December - February)
Time: 6:00pm - 9:00pm est
DM:  Dani Archer
Slots: Open: 8
Rating: T
https://forms.gle/jjXwMoii4MS1C4iT7

From the DnD 5e Campaign Book. Giants have emerged from their strongholds to threaten civilization as never before. Hill giants are stealing all the grain and livestock they can, while stone giants have been scouring settlements that have been around forever. Fire giants are press-ganging the smallfolk into the desert, while frost giant longships have been pillaging along the Sword Coast. Even the elusive cloud giants have been witnessed, their wondrous floating cities appearing above Waterdeep and Baldur’s Gate. Where is the storm giant King Hekaton, who is tasked with keeping order among the giants?
Day:  Every Thursday  ( From December - February)
Time: 6:30pm-9:30pm
DM:  Amanda Mettle
Slots: Open: 6
Rating: T
https://forms.gle/uhcxCBqSUUYgYzoC9

A high fantasy homebrewed RPG focusing on player stories and discovery of a long-forgotten past.

Day:  Every Friday  ( From December - February)

Our in-store games run on Game Passes. However, due to Covid-19, the social distancing guidelines have meant, we have had to move many of our games online for the time being. We understand the financial hardships many people are facing and so we are not strictly enforcing this. Our biggest concern is that everyone is able to continue their games, especially during these stressful times.

We do still have bills to pay and so we are asking those of you that are playing in the games that are able to do so, to please continue to support us by purchasing your game passes online or supporting us on Patreon.

You can now get a day pass, month, seasonal or yearly pass online:

Reminder: Please choose in-store pickup at checkout, and a pass will not be mailed out but we are keeping the record in our system.

We ask everyone who is participating in our program to signup to our Discord.

We recommend having your user name be your character name followed by (your first name) so that we can easily identify you.

Please read the welcome pin at the top and as always please practice internet safety guidelines as this is a 3rd party site.

By joining our Discord / Seasons Program you agree that you have read and agree to follow our code of conduct:

We hope to be back in the shop soon, until then thanks for sticking with us as we navigate these uncharted waters. 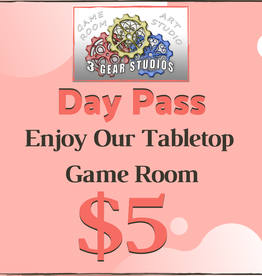 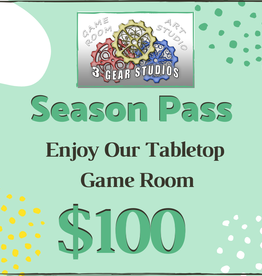 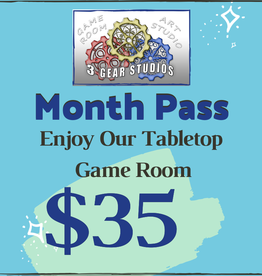 3 Gear Game Room Month Pass
Add to cart
Game Room: Month Pass
$35.00
← Due to social distancing guidelines, we are unable to offer in-store play at this time.    Free Shipping on orders $ 99+ use coupon code freeship at checkout Thank you! Hide